Trying to save money? Aren't we all. If you have Cisco phones, you may be able to save big $$ by switching to HP ProCurve switches.

When we needed to add more PoE ports to our Grayslake campus I looked at the price tag of a new Cisco 3560-48PS starting at $4,000, I knew I should shop around. I've been looking at HP for a while now so we picked up a 2610-48-PWR for less than half. Good deal, but then I had to get them working together. This is how I got it to work.

First thing you have to know is that even though HP tries to be like Cisco and use a lot of the same terms on the command line, they're not.

In my situation, I had to assign 3 vlans for my trunk. The other confusing thing is that there is no native vlan as you would think of one on a Cisco trunk. To do that, you set a vlan to the port as "untagged" wich makes it the default vlan for that port. Since you can only have one untagged vlan for a port, you have to make the others "Tagged". 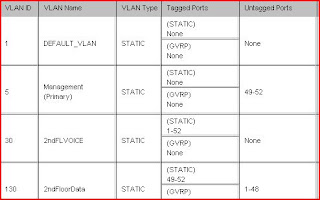 If you are using Cisco phones (maybe any phone) you have to have a default vlan and then a voice vlan. The voice vlan has to be set as a static tagged port and then also defined as a voice vlan from the command line as follows:

After this, you should be set. Well, sort of. Cisco 7912G, 7940G, and 7960G phones are not 802.3af PoE compliant they won't power up on this switch. The solution, add a patch cord. When you do, the positive signal of the PoE gets sent on the correct pin and the phone works. Kind of a bummer but $200 of crossover cables you can have all your phones up and running.

Oh, With HP you also get Lifetime Warranty and updates!

** Update **
After doing some more testing it appears that the phones are not getting an IP address from the Voice VLAN and are not using it. This will not work in our environment because it is designed to have voice traffic on the voice VLANS. If we had newer phones like the 7941G which support LLPD-MED which acts like Cisco CDP, we could make them work. Back to the drawing board :-(

**Update**
If I had listened to what @procurvehelp on Twitter had told me, I would have had a solution.

On the Cisco phone, after you change the Admin. VLAN Id and press the "Validate" soft key, press the "Save" soft key. After that, the phone reboots with the correct settings and you are now on the Voice vlan! So, it is possible to get 7912G, 7940G, and 7960G phones able to work with an HP ProCurve 2610-PWR-48.

**Update**
Last night we fully cut over to the ProCurve and everything is working great! I'll have to wait to see if we have any call quality issues but I don't think that we will. Think I might look at some more HP gear but just make sure that I have the newer phones!
Posted by Jeremy Good at 9:17 PM

With all due respect, comparing the 3560 to the 2610 is like comparing a Ferrari to a Pinto.

Good luck with your HP switches. I HATE THEM. For plain old layer 2 stuff they're fine, but I have rooms full of their layer 3 switches and they drive me nuts on a daily basis.

Sure they're cheap and you get a lifetime warranty. Wait until you have a *REAL* issue and need support.

I agree that the Cisco is far superior to the HP in many ways. But, when you just need a car to get down the block, the Pinto seems to be a good choice. We have many 3560’s but we are hardly using the feature set. Many all we only use one at each site as an L3 switch and the others as just a L2 switch and power phones. Thanks for the comments Jeremy.

Well I love the HP Procurve switches. I use them in a large enterprise environment with over 40 remote sites. We have 2 centralized Data Centers. We use all models mainly the 5400zl series. I even use them to connect DS3 circuits using bridges eliminating the need for a $18,000 Cisco router. This saves me a ton of money. I have had great luck with support. I also use Cisco and have for years they where #1 but HP is giving them a run for their money. Cisco is way over priced and I could go on and on with issues I have had with Cisco but they all have their problems and HP has been rock solid for us

What do you mean when you say "The solution, add a patch cord."? Are you referring to a cross-over cable?

We only have one network post per station and are looking to install the 7940 phones with HP 2610-PWR switches. Thanks!

I have a ProCurve 2610 24p/12 PWR and an old Cisco IP phone 7912.
I tried to connect it to the switch both a normal patch and a crossover patch but doesn't work.
Anything wrong or what?
Thanks.

Massimo - Make sure that you have PoE enabled. Do you have any other PoE devices to test it with? You have a slightly different switch than I so your millage may vary.

HP switch POE works fine with SNOM 320, but not with my Cisco devices.
Now, it doesn't matter because I've used the Cisco power supply, but the thing is kind strange.
Moreover, it's new HP Switch...
From my point of view Cisco is not suite enough to VoIP world.

I'm getting ready to do the same configuration here. Thanks for all your help. It looks like with all of this I should be able to get moving along. I'll let you know how it works out.

Glad I could help Scott. If you are just starting out, having the newer model phones would help out a lot as you would not have to use cross over cables or manually set the phones.

I did the testing on my switch today. It went really well. Thanks for all your help. This was spot on.

Great post, I tried everyhting on it but it didn't work at first. You need to make sure you enable the "power pre-std-detect" on the switch throught the CLI. After that it came up right away

So it's been over 1 1/2 years, how are those HP Switches treating you?

we have not bought any more. We have stuck with the Cisco switches.

Things have been going well with the HP switches. We're going to be launching another campus so I'm revisiting the idea of doing all HP switches there. There aren't many phones so even if I have to manually set the voice vlan, it's not a big deal.

I'll also check out the Catalyst 2960 that someone else posted about.

Very interesting. Anyone know of a good way to remotely push all of our 794x Cisco phones onto the voice vlan without having to visit them? They keep filling up our Data Vlan dhcp scope, curious to see if anyone has automated this with Cisco Unified CM?

Actually, "tagged", and "untagged" are the terms used in the RFPs describing 802.1q - Cisco is the one using the deviant terminology, not the rest of the world :-) Same with "trunks" and such. A trunk on anything other than Cisco is an aggregated port channel - nothing to do with VLANs. Although you mentioned that the HP switch only supports one untagged VLAN per port (the equivalent of a Cisco "native" VLAN - again, proprietary terminology), that is not part of the dot1q spec, and many switches support multiple untagged VLAN membership as well as tagged (opening a wealth of possibilities for "DMZ" type VLANs that are accessible from other VLANs, even though those other VLANS are not accessible to each other). In the Cisco world, "switchport mode trunk" by default "trunks" all VLANS. You have to specifically exclude VLANs that you don't want "trunked" using "allowed VLANs". Virtually every other manufacturer requires you to specify which VLANs are allowed on a tagged port - a huge security improvement over Cisco's (all to often used) open "trunks". I have to work with Cisco and a variety of other devices and often if Cisco's use of proprietary terms is really a good thing. I can't tell you how many times I've had to "translate" RFC terminology into "Cisco-speak" for net admins that have no experience outside the Cisco realm.

Kurt: "Virtually every other manufacturer requires you to specify which VLANs are allowed on a tagged port - a huge security improvement over Cisco's (all to often used) open "trunks"" - you forget that it's very likely that the person configuring the cisco device has been trained to know what he/she is doing with regards to that command. Whilst I see many people simply "have a go" at Procurves and the like due to the simplistic web interfaces, I wouldn't trust them to be security aware.
As you must know, the reason there is so much "cisco-speak" is mainly due to the fact that Cisco has been forced into creating proprietary protocols due to there being a need for them and the IEEE taking decades to create it. Take HDLC->PPP, CDP->LLDP, PVST->RSPT as examples.
The original spec for 802.1q back in 1998 actually used the term "trunk", but the revised standard in 2004 didn't.
Anyway, back to the Procurve, fine for a basic layer2 access switch, but I've never seen one in any financial institution/university/hospital for very good reason, they're no better than say a Dell powerconnect.

FAQ on HPwebsite is not up to date

Thanks for this article, it was extremely helpful in getting my new HP switch configured correctly.

Years later and still relevant. Some more info: the **# sequence to edit the config applies only to earlier firmware versions. Later versions use the very last settings menu option 'unlock config' which needs the phone password, likely stored inside the SIPDefault.cnf or SIPmac-addr.cnf (default is cisco).

Lucky Nicolaidis, We have moved to a MiTel system as well. I'd really love to get some of our old Cisco phones setup on the new MiTel but haven't tried yet. Do you have a blogpost or something that you used to get them setup?

i'm working on several HP switch and cisco phone, my problem is that sometimes the phone is non registered.

in the output there is this line:

the vlan id is not correct (vlan voice is 20)

We don't have the HP switch anymore (or the Cisco phones!) but if you figure it out, please post back for others. Thanks!

I am too much happy.