So you have a shiny iPad or iPhone and want to occasionally print. Sounds simple, right? Well Apple has your back and has come out with a great “New” feature called AirPrint that will fix all of that. That is if you have one of the few new printers that have AirPrint.

A lot of companies are seeing more iOS devices on our networks and more users who expect new features that Apple comes out with to just work. They have little patience for us or the market to align ourselves with the Apple way of doing it. We also have some expensive, high efficiency, and feature rich printers and copiers on our network that we can’t afford to just replace.

Our first solution was a hack program called “AirPrint Service for Windows” that worked well until iOS 5. Then it broke.

There were some other iOS apps that let you print to network printers but they cost money and you have to pay & install it on every device.

Earlier this month I found a program called “FingerPrint”. You can check it out at http://www.collobos.com/  They have a Windows and a Mac version and also provide a free one week trial. If you still like it after the trial, you can buy it for $10! I wondered just how well a $10 application could work but read on.

After running the quick install file and selecting the printers I wanted to share, I was up and running! 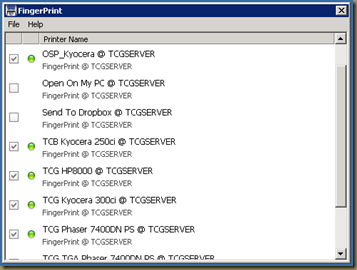 It also has a cool feature that I’ve yet to try that allows you to “Print to DropBox” where you can tie it to a DropBox folder. This could work on a personal computer but I don’t see it working on a network print server well.

Once things are installed and working, connect your iPad or iPhone to the wireless network (it has to be same subnet though. Stupid Bonjour!), and your printers will show up in the “Select Printer” dialog. 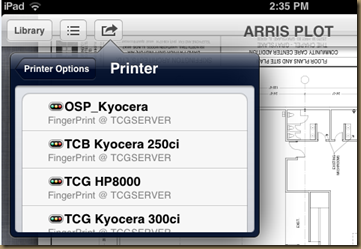 That’s it. After the free trial I bought it. It’s working great so far. I’ve not tested this on multiple print servers on the same subnet yet so I’m not sure how that would work.

There is one civet though. Your print server has to be on the same subnet as your wireless. This poses a problem for most of us that have an enterprise wireless solution and have it on a different subnet. During the trial period, I setup a Linksys AP on the same subnet as the server and it worked fine. But it kind of defeats the ease of use I was going for when people have to connect to another wireless just to print.

I’ll address how I got around this limitation in my next blog post about connecting virtual servers in VMware to multiple subnets.

Read about it here.